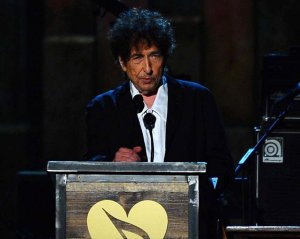 Bob Dylan is the first non-athlete whom I remember admiring. From a young age, I was hypnotized by his lyrics, perplexed by his voice, and blown away by his profound influence of seemingly all rock and folk musicians coming after him. My middle school self viewed him in a paradoxical light as both a mythic figure and a common-man-turned-artist, offering a blue print for us white & weird, middle class midwestern kids seeking to combine our creativity, humor, & intellectual interests in a respectable way. He was (and is) the revolutionary at the intersection of music, poetry, and politics and I wanted desperately to find my way to that crossroads.

Though I’ve since discovered that Dylan was much closer to a singular legend than imitable folksinger/activist and I am much closer to a dabbler than an artist, I continue to be enthralled with all things the Bard. Over the weekend, Bob was honored by the charity organization MusiCares and, after a slew of artists paid tribute through song & verse, delivered a rare speech. I read the transcript this afternoon and was deeply moved by several nuggets of wisdom from Dylan, who is now 73 years old. I’ve picked some particularly enlightening sections to present & reflect upon here. A trifecta of my favorite “sleeper” tunes of his are posted at the way bottom.

“They didn’t get here by themselves.”

Throughout his part-prosaic, part-poetic speech, Dylan presented himself as a sort of folk music inevitability and puts the focus on his songs rather than himself, substituting “the songs” for “I” when speaking of his career. It’s certainly strange to think of arguably the best singer/songwriter of all time as historically inevitable, but that’s the way he views himself. Dylan shared how he spent his early years learning and playing all the standards and essentially updated those tunes as anyone who had listened to them would have.

I loved Dylan’s reminder here that all music is part of a rich tradition and that songs are often simply new iterations of what we’ve been singing for generations, all along, together. “All the songs are connected” and they “didn’t come out of thin air”, he says. He under-rates his powerful poetic voice, melodic prowess, and careful listening skills with great humility and glosses over how his creative perspective perfectly fit into the socio-political circumstances of the 1960s and 70s, but his message is true nonetheless: Even prophets have teachers and are members of communities, past and present.

“If you have to have somebody’s blessing – you figure it out.”

Dylan also spent a good portion of his address re-hashing the names of critics & colleagues who either believed in his songs (Sam Phillips, Joan Baez, John Hammond, Doc Pomus, Buck Owens) or didn’t (Merle Haggard, Ahmet Ertegun). He explains how he felt singled out by critics and was derided for “confounding expectations”. There’s a tendency for people to trap themselves within a set of expectations, of what should & should not be, and then they call out anyone or anything that challenges the schema as if they are somehow culpable. Oh, the discomfort! Where to place the blame, where to find the scapegoat?

The lesson here is two-fold: keep an unwavering faith in yourself and your work and be open to the fresh & the different. If you sit & wait around for “somebody’s blessing”, truth & beauty will pass you by.  Sure, it’s reassuring and motivating to have people in your corner, but you may never find happiness if you’re constantly searching for the approval of others. Similarly, if the feedback you receive on your art or work is that it’s too unusual and is “not the way things are done around here”, you should not be discouraged on this grounds alone. In fact, should be encouraged. This echoes the Silcon Valley “disruption” ethos, which I selectively subscribe to; just don’t forget Dylan’s words about connection & tradition above!

“Voices ought not to be measured by how pretty they are. Instead, they matter only if they convince you that they are telling the truth.”

Dylan briefly chronicled the critiques of his voice in Friday’s speech and responded with Sam Cooke’s maxim above. Whenever I come across someone who dislikes Dylan, conversation falls on his “nasal-y”, “flat”, or “talk-singing” voice . It’s not for everyone, I admit. There are a few musical acts whom I have given a limited chance because of the lead singer’s voice. But I could never understand my friends and family fixation on the tone of Dylan’s voice and inability to listen to his lyrics, by far the most skillfully crafted, true, and witty in the history of recorded American music.

In some ways, Dylan’s defense of his voice are a continuation of his response to critics who blamed him for confounding expectations. For music lovers, the Bard’s career has been fun & rewarding to follow in large part because of his ability to hop genres, switch instrumentation, and change styles all while maintaining a certain voice (artistically, not literally, speaking) and singing thousands of verses concerning a few central truths. There are many eras of Dylan, some much better than others, but they all have their own curiosities & profundities and signal his willingness to try new things & push the envelope. Above all, Dylan’s example shows us we should speak, preach, & teach your truth with care, persuasion, and a touch of good humor…”until the day there is no more days.

That’s all for now. As Bob said on Friday, “I’m going to put an egg in my shoe and beat it.”

Lakeside Park
Oakland, California
You're always in the right place at the right time.
%d bloggers like this: