Over the last 50 years, there are few American citizens & activists that have done more to enhance American democractic society than Ralph Nader. It’s time self-identified progressives, “D”emocrats, & other citizens looking for concrete, constructive ways to resist Trump and the rise of the corporate political class start listening to Mr. Nader once again.

Sadly, many people of my generation have taken the bait of the centrist Democratic party of the 2000s and binary mainstream media in choosing to remember and regurgitate deceptive messages about Nader as the “spoiler” of the 2000 Bush-Gore presidential election instead of recognizing his instrumental role in the architecture and passage of many of the most pivotal citizen and consumer protection laws in modern federal history. Chief among them:

For those interested in learning more about the life and career of Ralph Nader from birth until 2006, I highly recommend the film An Unreasonable Man. Stream it below via the link above and be sure to donate $ to him or another progressive cause for good karma.

Thankfully, Nader is still leading legal and political efforts to break through corporate power and empower American workers and taxpayers as effective activists for peace, prosperity, and justice in the 21st century. In recent months. I’ve noticed a crisis of confidence in Democratic leadership and heard many conversations on the left and in the center about which leaders to turn to, honor, encourage, and challenge in order to strengthen a truly progressive movement and tradition across the United States. In addition to celebrating young, non-coastal, and nonwhite voices in and outside of the party, we could do much worse than turning to Nader in this unprecedented political era.

Nader’s most recent scheme to organize change and work together to derail the many ways in which wealth manipulates politics, labor, media, the environment and the quality of national life today is incredibly simple and relevant. In his most recent book Breaking Through Corporate Power, Nader draws on dozens of examples from US history to show how small groups of politically engaged citizens have created profound & lasting political change and outlines a methodology for organizing such groups in the immediate future:

WHO: 1% of the American populace

WHAT: Adopt political & civic activism as their #1 hobby, organizing themselves into local watchdog groups & communities which focus advocacy on putting political pressure on the 535 members of the US Congress (US House of Reps & Senators)

HOW: Communicate directly with the offices & staff people of our Congressmen & women about votes and pending legislation; organize town hall meetings and send summons to your representatives with clear agendas outlined & proof that events will be well-attended; meet regularly within local watchdog groups & communities to plan, evaluate effectiveness, & conduct meaningful outreach to non-engaged citizens to continually build a base of support.

In these times of resistance, it’s crucial we listen to voices, consider structures, and pilot practices that have been marginalized, dismissed, or ignored in the past by the mainstream Democratic (and Republican) parties. Nader’s voice, ideas, wisdom, and experience are tools which should be (re)considered those who are discouraged by the current administration and it’s heretofore oppressive political agenda. As he has constantly shown throughout his career and continues to remind us to this day:

BREAKING THROUGH POWER IS EASIER THAN WE THINK!

“It is essential that we end the double standard that exists between public and private morality. We must ask of our country what we ask of ourselves.”

Last Saturday, I was thrilled to see the streets of Oakland and other cities across the world flooded with women, young families, youth, and men in solidarity – many of them having their first experiences as activists in public.

What a promising sign for the vitality of democracy and social justice! I have spent the last week reflecting on how we can continue to build a movement for peace, equity, and opportunity.

The above quote from Patricia Marx Ellsberg is a great synthesis of some of my thoughts on how to live out our activism on even our busiest days. What it says to me is that politics is personal; our daily actions with other people and ourselves should reflect our expectations for our nations, institutions, and corporations; and our own mindfulness can have a positive effect on the behavior of others and society. Political accountability is a two way street!

We should especially keep Ms. Marx Ellsberg’s words in mind when talking to or about those who don’t share our same views or opinions at present. Compassionate action, caring speech, thoughtful listening, and living our politics every day are the most effective methodologies for turning others on to efforts that grow peace, equity, and opportunity. It won’t work every time, but I’d say it’s worth a try.

The fact that the quote comes from Patricia, the wife of Daniel Ellsberg (famous journalist and whistleblower of Pentagon Papers fame), is also an important reminder that alongside many of the most influential and “newsworthy” men there are their partners who are just as wise and powerful. This gives me hope that the women in the White House, in Congress, and in communities everywhere can continue to guide our nation and world towards more humane, healthy, and heartfelt policies.

(Verse 1)
Standing Rock, we stand with you.
Fists & prayers, brothers sisters Sioux.
Oil & jobs for who? Not us.
Invest instead in Earth & trust.

(Verse 2)
We ride the cold December wind with you.
We’re burning in the embers of your fires.
Protect the prairie, the water, the life,
from the greedy hands of the rich & white. 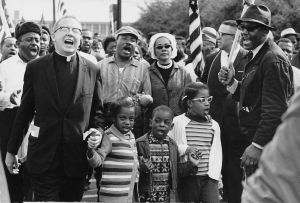 My wife and I saw Selma last night. I was impressed with many aspects of the film:  David Oyelowo’s commanding performance as Dr. King, the simultaneously vivid yet nebulous cinematography during scenes of violence, and the portrayal of the three-way chess game between demonstrators, the White House, and local authorities to name a few.

That being said, I found it difficult to focus solely on the artistic choices & narrative present within the film. Like many others with whom I’ve spoken who’ve seen the film in recent days, I found it impossible to resist the urge to draw connections between the civil rights movement as it was represented in the film with present day race relations, activism, and politics in the United States. I believe Dr. King would be proud of us for refusing to resist such an urge.

There are countless angles one could take on Selma and its relevance to today’s United States and its social movements, but I’ll take up just one here: the Power of the Clear Ask.

As portrayed in scenes with Lyndon B. Johnson early in the film, MLK had a clear ask:

Dr. King and his allies designed the package above as a concrete goal for their movement and thought of creative ways in which to non-violently demonstrate and put pressure on authorities in order to draw attention to & further this goal. Sure, it took countless hours of internal debate, years of effective activism, a plethora of false starts & failed attempts, and continuous, often vitriolic disagreement amongst the SCLC, SNCC, Nation of Islam, and other groups before this ask was refined to the point which Dr. King could deliver it pithily to the President and other power brokers. But, again, the ask was both clear & concrete and I believe this helped energize & focus the movement in a beautiful way.

Now, let’s pivot to the present day: I have been extremely interested but rarely directly involved in the Occupy Wall Street and #blacklivesmatter demonstrations of recent years. I totally agree with what these movements are against but have rarely been a participant in their actions because I struggle to articulate what, concretely, they are for. I am in spiritual solidarity with these groups generally yet don’t 100% identify myself as a member of these activist communities because they seem to lack what I see as a proactive or practically progressive approach. The ask isn’t clear.

These movements are relatively young , are addressing complex issues with powerful forces on the other side, have engaged many people from a variety of backgrounds since their inception, and can point to progress as a result of their efforts on several fronts. Lots to be proud of for sure. My critique of their lack of the clear ask may not be entirely fair. It could be that I am not speaking with the right members of these groups, am not listening carefully enough, am not being adequately patient, etc. But, again, my impression is that they haven’t achieved their full potential because organizers & participants haven’t effectively molded their clear ask(s) yet.

I’ll be excited to become more involved in direct actions related to such movements  if and when the asks become more clear. Call me a bandwagon activist, a Johnny-come-lately, a follower, whatever. In some arenas of life, I have a clear vision for what change, success, equity, and fun should look like; education and music being two. I know I can be a leader in these corners of the world. I love collaborating with others to think of what could be next in these fields and live for recruiting others to the cause. In other arenas of life, like income inequality, police-community relations, and institutional racism, I want to be a long-distance runner for justice and peace, a soldier for truth, but need some support. I’m confident I can contribute to the cause, but I need strong mentors and teachers to show me the way. I need an image of success, a benchmark for progress, a light in the dark, and I know I am not alone. We need a clear ask. And once we have it, it will be that much easier to fight for the right and just answers.

Lakeside Park
Oakland, California
You're always in the right place at the right time.
Loading Comments...